When I was a little boy, I wore a watch like this: 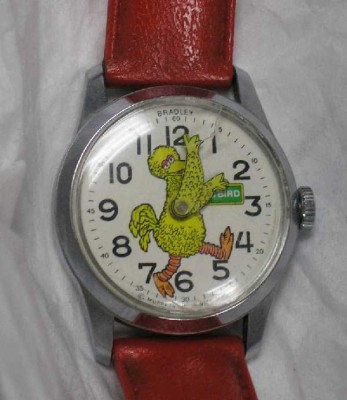 It’s a cute, boys, mechanical watch. Swiss made by Bradley. I spotted this at an antique store and had to pick it up. It has some cracks in the crystal, but it does not effect the watch operation. It is a handwind and keeps great time so far. No claim on jewel count, so it is probably a pin lever watch. Nothing wrong with that, it makes them very shock resistant, which is great for kids. I just couldn’t say no to it.
Eventually, when Glenn respects things, I will let him wear it. It is on a 16mm band (the plastic original) but that can easily be swapped for leather or nylon. Every time I look it it makes me smile. I wish it photographed better, it looks nicer in real life.

Features:
Case: 30mm diameter, base metal, no water resistance claimed
Back: Snap Down
Crystal: Acrylic, domed
Movement:   Handwound, Swiss  Made, no jewel count claimed on exterior.  Upon inspection, it is a jeweled watch with Incabloc, EB.
Complications: None
Other: Licenenced Muppets Big Bird.  Probably made 1980, serial number is 015,  which is probably 15th week of 1980.  Bradley was licenced to make these 1974 to 1983.

Overall, this is a really cool watch.  It is still one the orignal band.  As you can see, I had the crystal replaced, greatly improving the watch.  When the watch crystal was repaired, I was able to see the movement.  It is a jeweled movement from EB, a movement supplier very popular in the 70’s.  It has shock protection on the balance staff and appears to be jeweled on the 3rd and 4th wheels, at least.  The movement was very clean and running great.  With any luch, Glenn will be able to pass this down to his kids.

This site uses Akismet to reduce spam. Learn how your comment data is processed.