Had some free time and I decided to take a look inside of my two quartz watches.  It seems like not many people take photos of quartz watch movements and I wanted to add a little to the internet.  The first one I opened was my trusty, 5M62 based Seiko Kinetic: 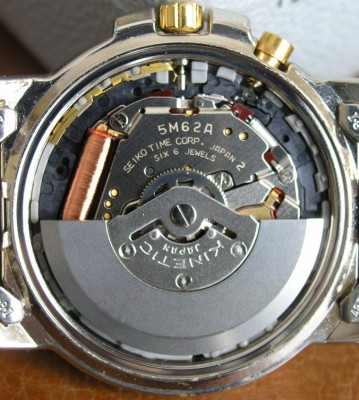 As you can see, the movement is well detailed with thick cast and stamped metal parts.  All the metal surfaces are machine tooled or bead blasted.  The movement has 6 jewels, 2 are used on the self generating system.  The rotor or uneven weight is identical to mechanical automatic watches.  What is different is in an automatic watch, the weight spins pretty freely, then comes to stop.  This rotor starts slowly and takes a second or so to stop moving and does so with a slow, braking looking motion.  This is somewhat to be expected since what it happening is the rotor turns, turning 3 reduction gears, then turns the rotor on the generator.  You can see the cap jewels for the reduction gears here: 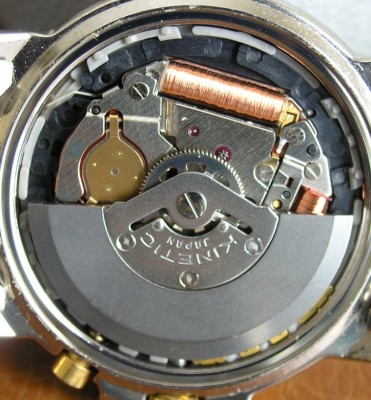 From what I have read, the generator inside spins at up to 100,000 RPM!  I don’t there are many companies out there that can manufacture a generator less than a 1/4″ across and work at those speeds.  The coils you see are actually the stepper motor and generator for the watch.  I am quite surprised how large they are.  They should last damn near forever with that many winds to the coils. 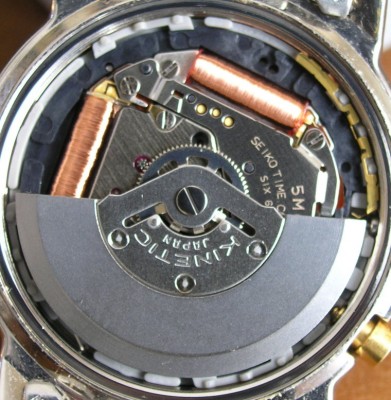 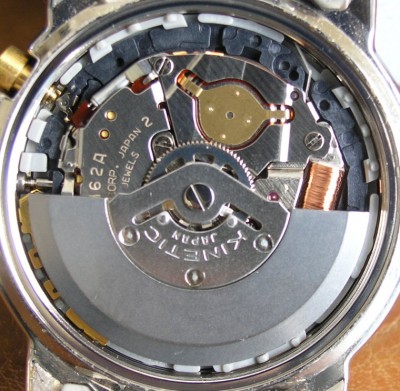 In this photo you can see the power storage cell, which is a titanium lithium ion battery in a shock absorbing housing.  This is something I have never seen in a quartz watch.  I wonder if other high end quartz watches share this feature?  Speaking of quartz, around the 10 o’clock position you can see the quartz oscillator. It looks like a metal tube.  There are two companies in the world that make their own quartz crystals, ETA and Seiko.   I looked at the service manual for it and the watch actually uses 4 jewels in the gear train.  2 for the stepper rotor, 1 for the fifth wheel, 1 for the center wheel.  Most companies don’t bother with jewels on quartz watches, but it really does extend the life.  The entire movement is held is what looks like a hard, thermal set plastic, then shock mounted (using the brass springs you can see at the edges of several photos) in a soft set plastic spacer ring.  I, again, have never seen so much shock protection in a quartz watch.  The movement has a traditional metal base.  Many aspects of this movement show that this watch was designed by a company that began with mechanical watches.  With 61 individual parts and the level of workmanship displayed, I expect this watch to work for decades to come.

As a contrast, here are the guts of my Fossil watch: 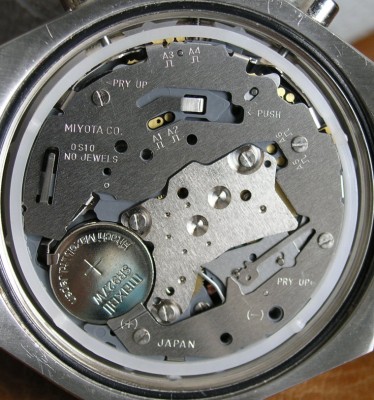 Inside my Fossil Speedway is a Miyota OS10 no jewel quartz chronograph movement.  Who is Miyota?  Miyota is basically Citizen’s movement making division.  They sell to anybody who wants a quartz or mechanical Japanese made movement.  They are very respected in the watch making world and a godsend to low end watch makers.  They make robust movements at low cost.  If you don’t care about having a Swiss movement and it’s not a Seiko, it probably has a Miyota movement.

The movement is based on a gray, plastic base and covered with a thin metal plate.  There is not much to see here, the stepper motor and quartz oscillator are hidden.  The battery is held in place with a small, metal clips.  Dispensing with the tradition machined metal base is certainly a cost reduction.  The plastic movement is held inside of a soft, plastic spacer ring.  Of course, this is not a very fair comparison.  The Miyota is a low cost quartz movement, the Seiko 5M62 movement alone is over $150.  A better comparison is to the Seiko 7T62 quartz chronograph: 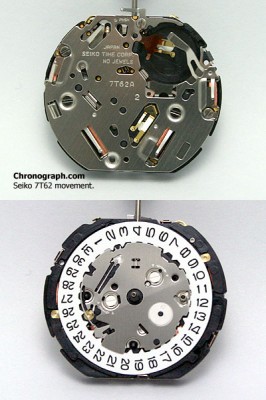 The workmanship is pretty similar.  The Seiko movement does cost a little more, and has quite a few more features like 1/5 second tick, alarm, and second time zone.  I am actually quite happy to know that my Fossil has a Miyota movement, made in Japan.  I hope they continue this trend.

It was neat to look inside some quartz watches.  They are remarkable machines, but I still like my automatics more.  They are great for people who just want to slap on a watch and not worry about it.